Since the snow is almost gone, the uplifted enduro experiences in Pyrenees started this last week with an amazing team from Norway that we picked up at the Barcelona airport past Thrusday. The 6 riders booked a 4 days trip in Pyrenees playground, they were the firsts on riding the mountain trails around Cerdanya valley this 2016 season, and they had great fun. Here, we'll tell you just a little part of they dreams that turned to reality!

When we met at Bcn Airport, the riders asked me where was the sign like if I were a driver waiting for an executive, and myself said that it was pretty easy to identify the bike bags. I meant that mtbdreams is not a TTOO, but a taylor-made cycling travel agency and I wasn't just his driver, I'd his guide as well, and finally happened that all of us became friends.

The trip started in Barcelona setting up the bikes on our garage located in the upper part of the town, where we started the afternoon's riding in Parc de Collserola, the Barcelona hills throught the single trails. It was a 3 hours tour where the guide prioritized the quality instead of the quantity. As it use to happen with the norwegians, their biking skills were pretty higher that what they told me, and I was ready to challenge them and got a precise idea of what they were ready to make in the coming days in Pyrenees. In the evening, all the team was transfered to the heart of the Pyrenees. 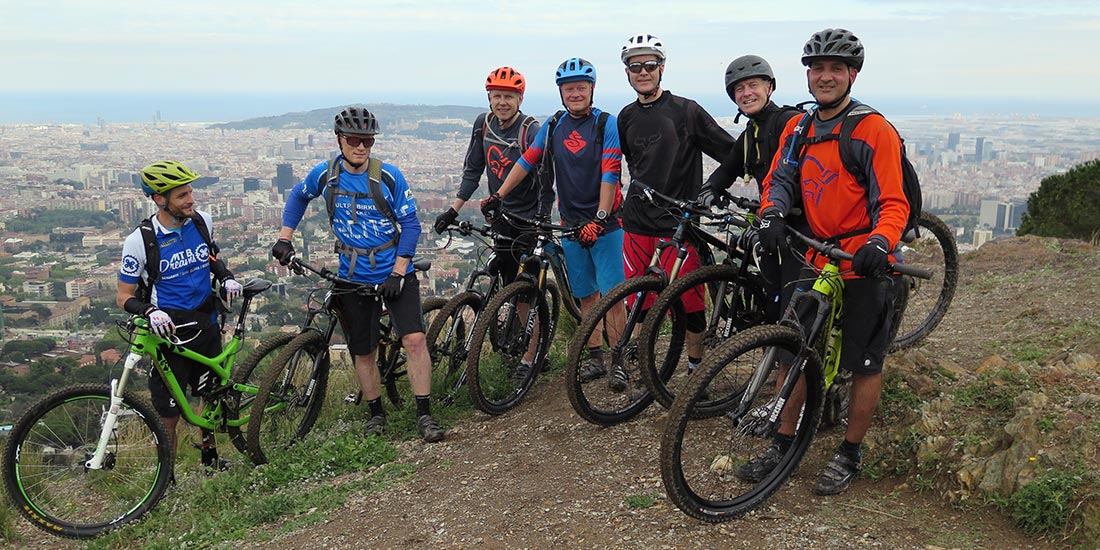 Once in the mountains, the country house where they were lodge unplugged all the noisy ideas from their minds and the peace of the valley was pushing them to ask for action.And it was about to arrive in Baridà area where we had 3 uplifts.

The Skytta team were positively surprised by the unavoidable warm up before the descents with stunning views upon the valley during the short climbs. First descent was pretty easy for them, it suited to feel confident with the terrain and the bikes, since the biking season was just starting for them. But the second one from Estana, that has an infinnte switch backs section, made them fall in love with this tightened turns. Finally, after a lunch break in a sunny terrace, the third descend of the day was qualified as the best of the day just as the riders said. To end up with this first stage, the group had a session in a bathing estabilshment where the thermal waters that loosen all the riders screws :D !! 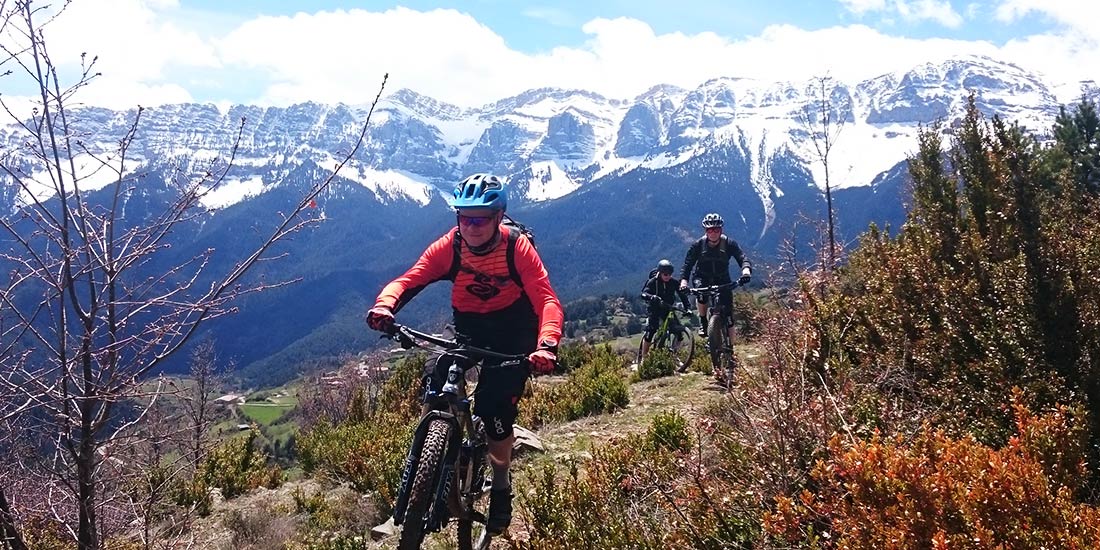 The changing weather on the third day didn't pause the trip, and even if it was snowy at the beginning of the first track at 1800mts altitude, the team asked to stick with the plan. And the first to runs were quite epic in a muddy terrain, crossing many times a river where none of us could manage to finish it with dry sockets. But fortunately, the sun showed up at lunch time and we all shared a tasty mixed dish in a sunny terrace while the clothes dried quickly. The afternoon ride was a joy for all, and I have to mention that two of them avoided the transfer back to the country house and choosed to pedal along the Segre river singletrack. 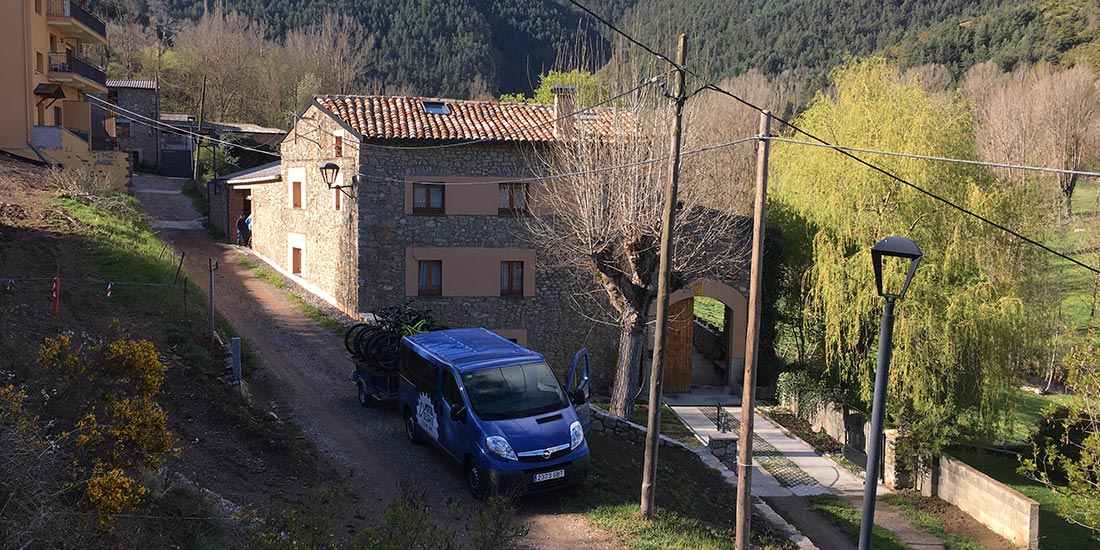 Then the last day started in the workshop fixing a ring from Christian's bike, but thanks to Josep from Esports Iris in Puigcerdà it's been like a pit stop. We were supposed to ride on the French side of the border, but the snowy weather in this northern side of the valley didn't allowed the team to ride there. That's why we went to the Serra del Cadí Natural Park to enjoy one of the best trails around, the Gonec singletrack. The uplift is not possible, but the scenery is so impressive that the pedalling climb was like a meditation exercise for all of us. Then a "Jordi's" flat section (when I say flat section, I mean we won't win or loose any altitude, but it is true that it's not really flat, it's more like an up and down paths :) below a rock wall and the desired 10k descent on Gonec's trail. In the last afternoon, having an uplift until 1900mts high, we had a freeride descent with a view uppon the entire valley was the dreamed "see you soon ride" that closed the enduro sessions after 4 days. 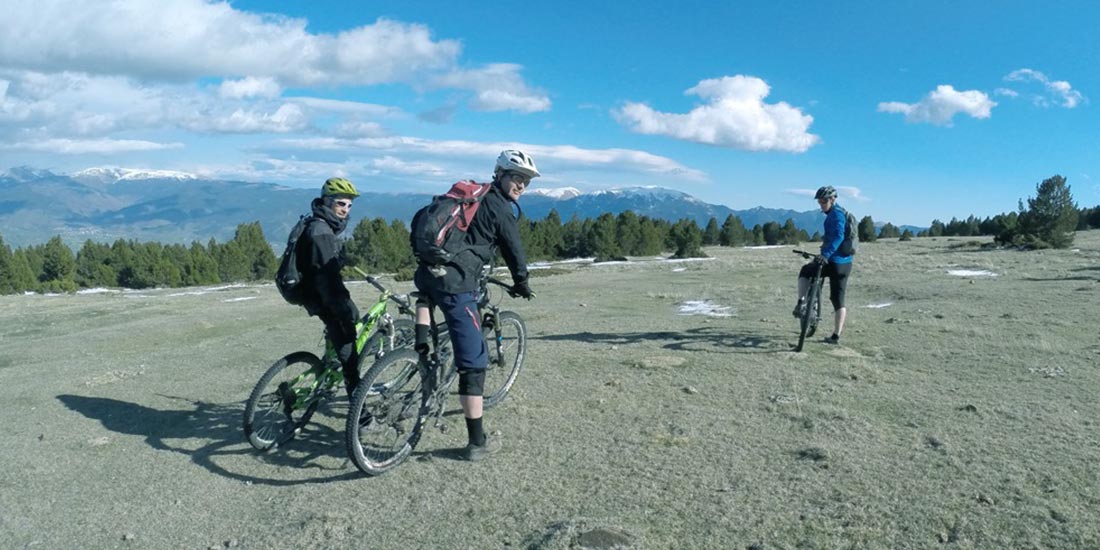 We, at mtbdreams, hope all them have enjoyed it as much as us. As I always say, we set up this experiences to enjoy the rides, to have a intercultural exchange that is priceless, and because bikes are foundations of many friendships.

Hey team Skytta, I'd like to tell you that my dreams became reality this 4 days in Pyrenees.

Reading at their reviews, we feel very happy 'cause  it looks like all this was real and that we made their mtb dreams happen as well!

You might take a look at our Facebook Fan page to see the full album and check what the Skytta team wrote about this experience.